Spent a day 'round Sumo's yesterday, making and laying in the wiring loom on his Panther trike. Whilst I was there he brought home the new frame for his latest venture into insanity. (pictures on the Ironworks site tomorrow) Made by Briz, it is a lovely piece of craftsmanship, the more you look at it, the more detail and quality work you see.
Seeing this got me to thinking that this could be the solution to the Hitchcock's delay problem, and a source for anyone else who might want to do it. I mailed Briz this morning, don't expect to hear anything until tomorrow as to whether or not he'll take it on, but hope springs eternal and all that.
Poking around his site I came across this in his archive pix, no mention of year but interesting never the less. 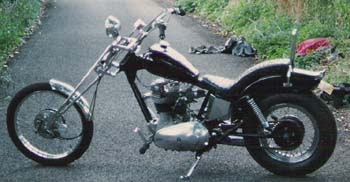 Brought to you by Quaffmeister at 01:09 No comments: 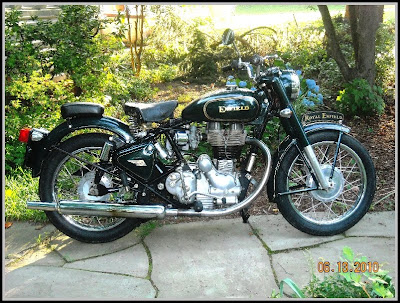 Jim from Maryland sent me this picture of his 500 that he has recently acquired, and a very clean example it looks too. Although he doesn't intend to go the hard tail route (at the moment) he is planning quite a lot of mods, centring around a vintage theme. Maybe, what we call over here "The Colonial Style". He has said that he will keep us up to date with progress and pics as things develop. Nice Jim, looking forward to it.
Brought to you by Quaffmeister at 07:08 No comments: 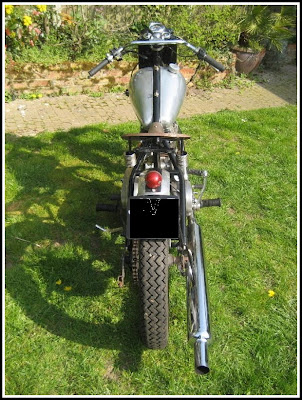 Mr Brown from the DB forum has given the thumbs up to show you his Bullet. The silencer is for MOT testing purposes so don't be distracted by it. 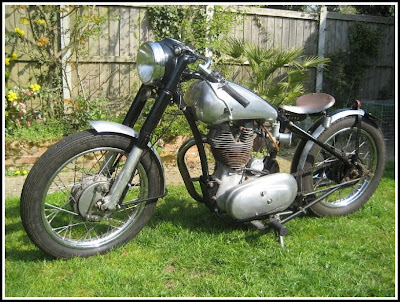 Full custom frame does up the ante somewhat. 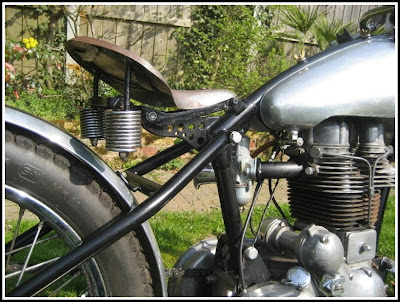 Nice work, inspirational stuff Mr B cheers.
Brought to you by Quaffmeister at 13:12 No comments: 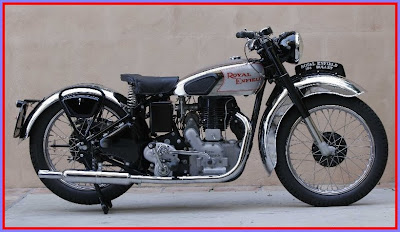 This picture of a restored '47 came from The Garage Company in LA's site, if you squint whilst looking at this picture, you'll see the hidden Bobber trying to get out. Shit can the front muddy, shorten the back, lower the seat and all of a sudden it begins to make sense.
Brought to you by Quaffmeister at 09:11 No comments: 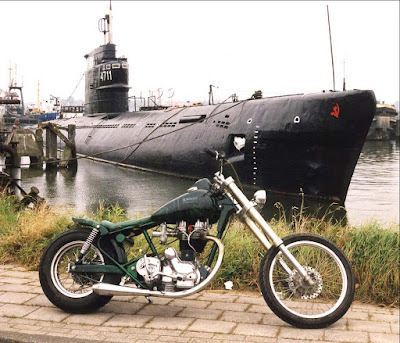 A bit of a mixture of styles and parts sourcing here, but overall the lines work well. The Fat Bob tank set-up sits well as do the forks. Also love the 16/21 combination at each end, the swinging arm has been changed to accommodate the wide tyre, but I'm sure chain clearance is not going to be an issue running a 5" or 130 tyre.
Brought to you by Quaffmeister at 05:08 No comments: 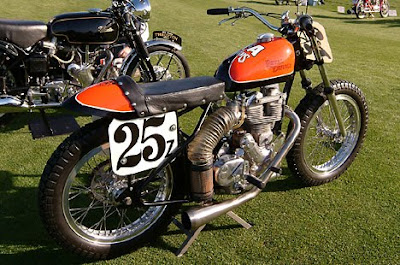 Picture from The K Hulsey collection.
It seems that Stateside hardtail Bullets are not a new thing. It is difficult to find information on these flat track Bullets out there on the Hyper Highway, so if anybody can point me in the right direction it would be appreciated.
Lovely looking bike though, it's difficult to make out the forks, there are some that use standard Enfield legs but reversed, so the leading axle becomes trailing. This will have the effect of increasing the trail and therefore stability, maybe giving it a tendency to understeer.
Any more cool pix out there folks?
Brought to you by Quaffmeister at 10:58 1 comment: 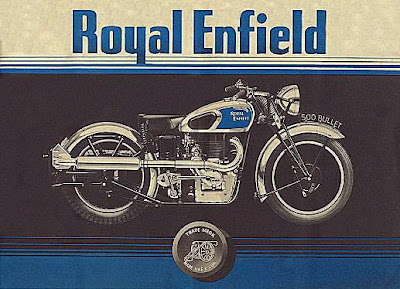 Do like that high level/Fishtail combo
Brought to you by Quaffmeister at 11:44 No comments:

Bad News From The North 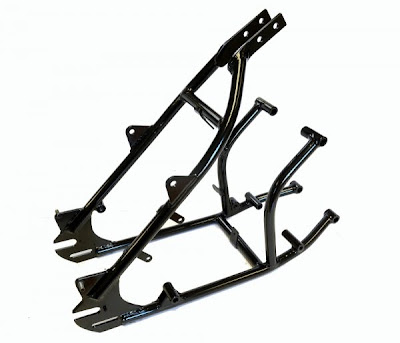 Received this today from Allan Hitchcock;

Sorry, but still no firm delivery date. This is one of those projects which I wish had never started. We only initially made a small batch as we were not sure how ell they would sell and after being pleasantly surprised we ordered a larger quantity which I think was the downfall for the first company. Upon moving to a second manufacture we had to go through a slow process of proving one of their builds first. Since then, the manufacturing process has been even slower. I have a long list of potential customers and it is so frustrating.

All I can do is keep apologising, but I appreciate that this does not help.

For what it is worth, 10 days ago, one of our guys rode our prototype bike with the conversion for 600 miles on a charity ride through the night. I had problems keeping up with him round the corners on my café racer. It really does handle well even with the old style tyres we are running.

Looks like this could take some time folks.
Brought to you by Quaffmeister at 10:59 No comments: 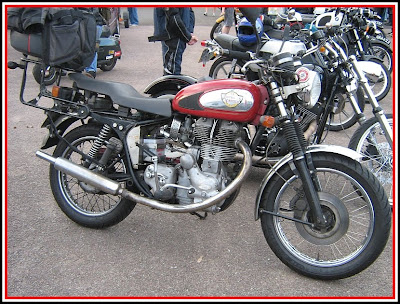 A very unusual bike to see nowadays, a genuine Big Head Bullet, well the motor is to Fury spec anyway.
Brought to you by Quaffmeister at 09:26 1 comment:

Stuff in for the Bullet Bank

Got the latest instalment through from India today, this complete half width front wheel hub. This, along with the rear hub can be taken down to the painters to get a coat of the final colour, and then the hunt is on to find a wheel builder who is quoting less than 8 weeks. 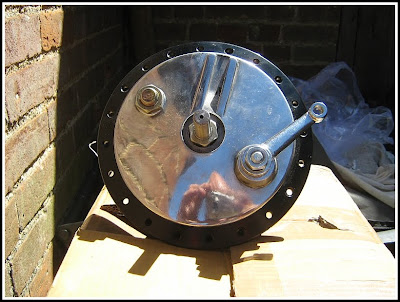 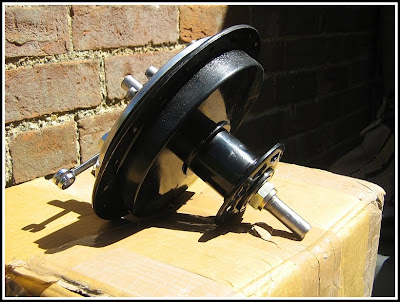 Brought to you by Quaffmeister at 09:17 No comments:

A Bit Close to Home 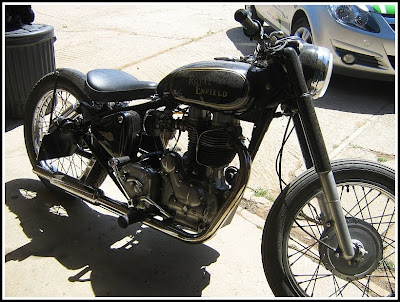 Went over to the local Vintage Motorcycle Club concourse event last night and got talking to Farmer Rob and his brother. They said that there was a guy working on an Enfield that was worth a look. So with the sun blazing, work was knocked on the head early and I scooted 'round there to check it out as it's only about 3 miles away.
This is what I found, all pretty simple stuff really, but effective in altering the overall look. The swinging arm has been stretched by six inches, the front muddy put on the back and some small adjustment done to the tool box mountings. A weekend's work and virtually no cash outlay, not a bad result 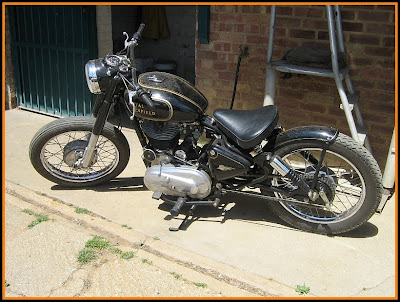 Brought to you by Quaffmeister at 07:40 3 comments: 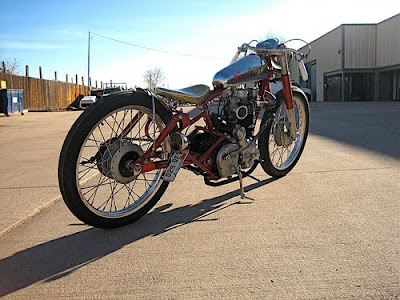 Board Tracker stylee, from The Speed Metal Shop. It looks a bit radical until you check how much of it is still standard. A bit of the less is more approach perhaps. Stripped out as lean as this a Board Tracker does look inviting....... Hmmm? 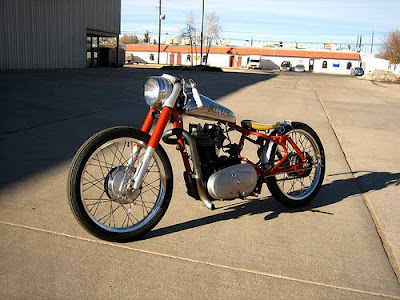 Brought to you by Quaffmeister at 13:34 2 comments:

Chop 667 did a bit more digging out there on the virtual highway and came up with some more shots of the blue bob job. He found them at Mulligan Machine a quick e-mail to Derrick over there got the clearance to use them on here, thanks Man. 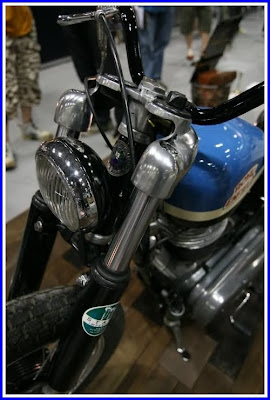 Using the cut down top yoke, not a thing that I thought would work but it doesn't look bad at all. There is a school of thought that says cutting down the standard casquette leaves it too weak, difficult to tell whether this is a standard unit or not, although judging by the amount of metal around the fork leg tops it may well be a custom piece. 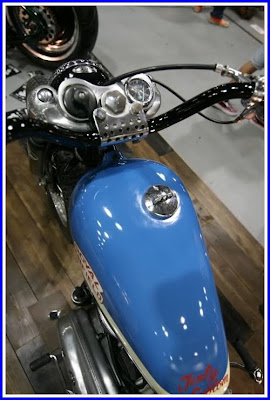 The classic early Sportster tank, still a fine looking tank but kinda flogged to death on custom bikes by now. It does raise the question of tank choice though, a narrow number would probably suit as it would emphasise the bulk of the motor. 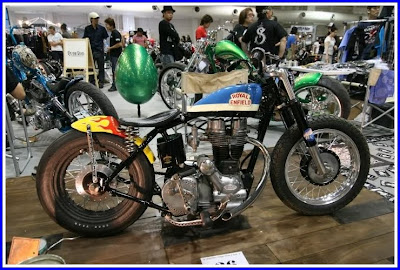 An overview, showing the cobby lines of the bike. The hardtail is interesting, these pictures were originally posted in August 2009. Too early to be a Hitchcock's unit, but there are unused lugs at the rear of the lower chain stays, suggesting that it is not a one off.
The angle of the gearbox post can be seen here, which is going to be a problem. The angle matches nothing else on the bike, and, to my eye, looks incongruous. Maybe a wrap round dummy oil tank/battery box in there, not sure but it's an area that needs sorting. 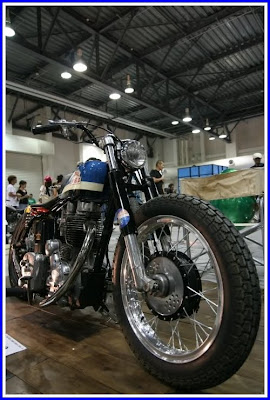 Flanged alloy rims will do it for me every time, a bastard to clean but worth it. There are hints that the forks may well have been shortened by a couple of inches, looking at The Madras Marauder, albeit on the centre stand, the shrouds finish two inches above the rim. More food for thought 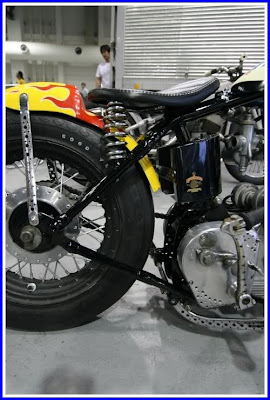 Nice bit of Flat Track inspiration with the little tail unit. The convoluted shape of anything to fill that space beneath the seat can be appreciated better in this shot, interesting times ahead.
Not sure about the liberal use of a drill for lightening holes everywhere though, Bullets ain't the heaviest bikes in the world and, personally, I don't think they're necessary.
Brought to you by Quaffmeister at 01:58 2 comments: 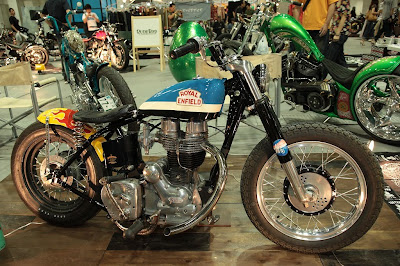 Found this pic whilst surfing the images on the big G. Far more in tune with what is being sought after. Taking the gearbox as a scaling reference, the complete bike must be very much on the small side, things are looking up.
Brought to you by Quaffmeister at 12:34 1 comment: