The Madras Marauder is my sole means of transport, and as such gets used in all weathers including the sub-Arctic conditions we are experiencing across Britain at the moment. Generally the Ol' Girl is fine, starting and running on demand on the coldest of mornings, and that hasn't changed. However, of late, after running for a mile or two it started to miss, well not really missing as the exhaust note still sounded about right, but there was a decided un-willingness to rev and a hesitation. So I checked the points, the plug all the normal shit but to no avail, still the same. Thoughts of big end failure started to sneak in, and wouldn't go away, although stopping and starting again when it was in this condition was not a problem and it certainly felt free and smooth enough on the kick-start. 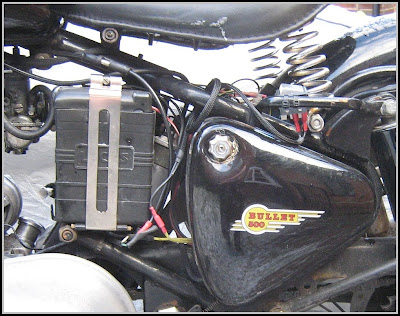 I'm running a 180 Watt alternator with a solid state rectifier/regulator package, all bought from a well known aftermarket manufacturer of such things, and a 60/55 Watt Halogen headlight bulb. For the last six months it's been overcharging when running without lights, so I've been lights on man since then, no problem there, just a bit gay I suppose. I wondered if that was the cause of the new problem, although the ammeter showed a reasonably well balanced state of affairs, I'm not sure if the AC from the alternator was "getting through" the regulator and screwing with the ignition coil. As a quick and easy test I opened up one of the two alternator leads and inserted a switch in line. This allowed me to effectively remove the AC input from the system when the problem occurred, just to see if there was an effect. 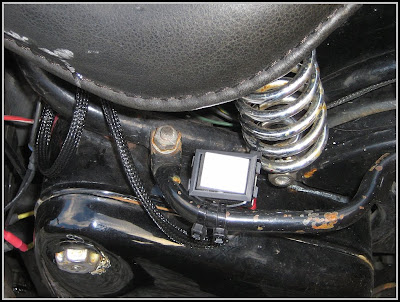 An effect there certainly was, when the gremlin kicked in the switch was operated to isolate the alternator and the cure was immediate, back to smooth normal running. This brings another force to bear though, drawing about 6 Amps from a small battery is not a long term prospect. So with temperatures struggling to get up to freezing it was a fun filled ride to the salt mine this morning, groping around under the seat to hit the switch whilst wearing gloves, being a manual cut-out type of thing.
Problem found then, but not the cure as yet, because of the weather and Britain's refusal to concede that we live in Northern Europe, the postal service is all to cock. I mean, snow at Christmas who would ever of thought it ? I phoned Paul Goff today and he is going to get a rectifier/regulator in the post Special Delivery so hopefully it'll be here Monday and normal service can be resumed. Just a point here, Paul did not supply the original unit that has gone FUBAR so this is new ground we're covering here.
Brought to you by Quaffmeister at 07:10