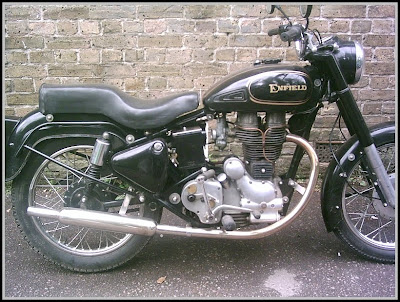 This is the 350 Bullet that I bought about 4 months ago off of DB'er Largo down in Dover. The original plan was to use this whilst work was being carried out on the Madras Marauder. The performance is uninspiring to say the least, probably not a lot slower than the 500 top end wise, as long as you've got a while to get there.
Thinking about the decision taken recently about going the black and aluminium route, it is likely that the bike will end up at least 50 pounds lighter (25 kg in new money), making for a performance increase. There is also, of course, lots of stuff in the Hitchcock's catalogue that will breath a little more fire into it's belly.
Using this as a base to start from also means that things can get under way a bit sooner. Originally I was going to get everything ready before starting, to keep the down time to a minimum. That would no longer be an issue, and work can start before the fabled hardtail becomes available.
This is really beginning to sound like a plan.
Anybody want any stock Bullet bits ??????
Brought to you by Quaffmeister at 11:24