Had a little go in a car today, drove my daughter's car on a 430 mile round trip to Lancashire. That is almost certainly further than my total four wheeled pilotting over the last two years, can't say I enjoyed it, although it would have been an adventure on the Marauder that's for sure.
The purpose of the trip was to deliver the project motor to Britain's most respected Enfield tuner, Mr. Andy Berry. He is going to tune the motor to scrambles (that's moto-cross for the young guns out there) spec, as it's only a 350 and I ain't the lightest of blokes I figured a little more coal in the old boiler department wouldn't go amiss. 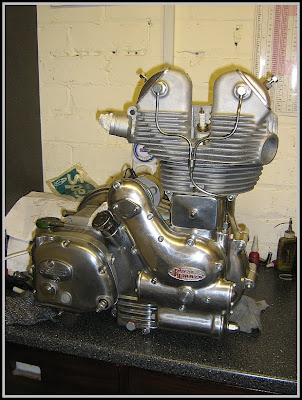 Andy is passionate about his Enfields to say the least, this Big Head motor was sitting on the bench. The finish is superb, and everything looks just right, when he asked what level of finish I want on the 350, I said "like that one" 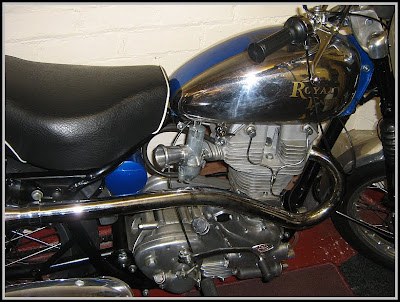 Amongst other things in his workshop was this Street Scrambler, again fitted with a genuine English Fury head, later frame and a five speed gearbox, very nicely done.
He reckons the 350 motor should be ready around Christmas, that's cool, I'll gladly wait. It ain't gonna be cheap, but the best seldom is!
Brought to you by Quaffmeister at 10:51