When it's time to create a custom part to do a job, I usually find that a good idea takes about a week to filter it's way up through the crap and throwaway thoughts that initially come to mind. It's pretty safe to say that the first plan will not be, or even similar to, the finished article.
The part in question in this example is the steering stop. The Spartan Engineering yokes are designed for trials use, and as such are not supplied with any steering stops, or for that matter anywhere to mount any. It is a must have feature, as any work carried out mounting the tank can only be done safe in the knowledge that the forks will not, cannot suddenly swing onto full lock and clout the tank. I didn't want to drill the yokes so whatever was there had to be utilised.
The steering stem is held into the bottom yoke with an M12 bolt, which is obviously concentric with the arc of the turn of the forks, so that is a good fixing point for a plate to be attached. The next hurdle was sorting out a sturdy way of stopping the plate rotating around the single bolt, luckily Spartan bore two 16mm diameter holes in the underside of the yoke for lightness, ideal for two pegs to locate. As a bonus it was also possible to utilise the same bracket to mount the head light, again saving the need to drill, and a bracket that serves more than one function is always good. 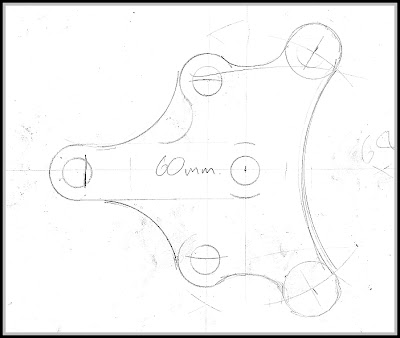 The bracket was first drawn out by hand, just to get a feel for the overall look of the finished article. 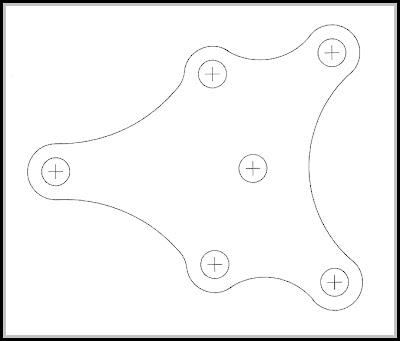 It was then redrawn using a CAD package to the exact finished dimensions, and to get the various fillets and curves finalised. 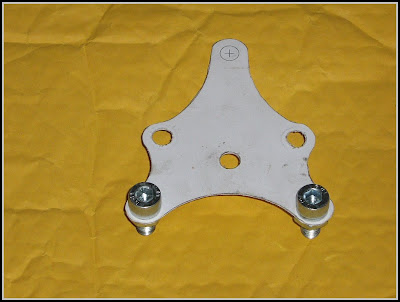 After completion using the CAD system it was printed out onto self adhesive label stock at full size. This in turn was stuck to a piece of plastic card, and the holes drilled and the outer shape cut out using scissors, this makes for a strong template that can be handled and test fitted. Bolts were fitted into the holes and the assembly offered up beneath the bottom yoke. The two bolts shown in this picture are the actual steering stops. 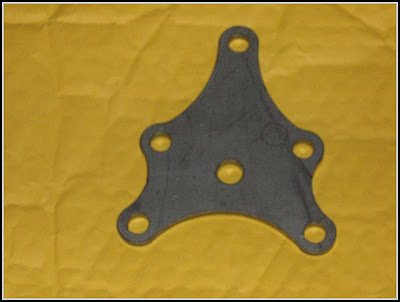 Once it was established that everything was in order the CAD drawing was e-mailed to a sheet metal company and the part was laser cut from 5mm thick Mild Steel to the exact dimensions needed. Job's a good un as they say.
Brought to you by Quaffmeister at 05:58