Hubs Back And Front Back

When the two half width hubs originally arrived from India, I was never really convinced about the finish, it was certainly black enough, but the thickness of the paint did not seem to be much. The last thing that you want is for the hubs to be going rusty or the finish deteriorating after the wheels have been laced. Not really a lot you can do if that happens, short of stripping the wheel down and doing what should have been done in the first place. 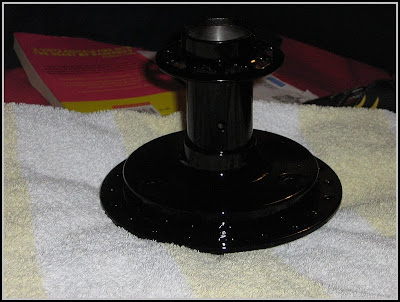 I had ordered and received two flanged alloy rims and spoke sets from Hagon's, and Martin was all set to build the wheels up. I looked at the hubs again and decided that seeing as I'm not blessed with X-Ray vision or indeed specs, the paint had to go just to know what was on there.
Initially I attacked the hubs, well when I say attacked it was more a threat, with Nitromors the original paint capitulated without any effort at all. Revealing what seemed to be one coat of black lacquer straight onto the steel, a finish more akin to the black japanned wood screws that were once available. 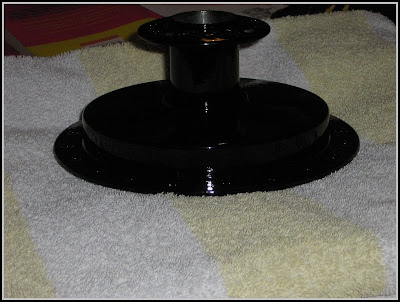 I sprayed the cleaned hubs with a zinc galvanising spray followed by black acrylic, the problem was that it was too cold and probably too damp to get a decent finish and they came out almost grey, such was the bloom on the paint. Seeing as the weather outside will neither be warmer or drier for a few months yet, and the chances of doing them indoors was a non-starter, I laid them off to Pete. He runs a car repair and recovery service complete with spray booth, and he phosphated them before shooting them in 2 pack black. Certainly a better result than I could achieve at the height of an arid summer, so now it's a matter of whipping the bearings in and getting the hubs to Martin. Should be looking at a set of nice wheels pretty soon.
Brought to you by Quaffmeister at 10:42