Well, Craig has answered the call and sent in a write up on his Meteor/Bullet, or Mullet as he would rather have it. Although I'm posting it here, there has been a page created as well so it is not lost in the passage of time to the older posts section. Thanks Craig you are a star. 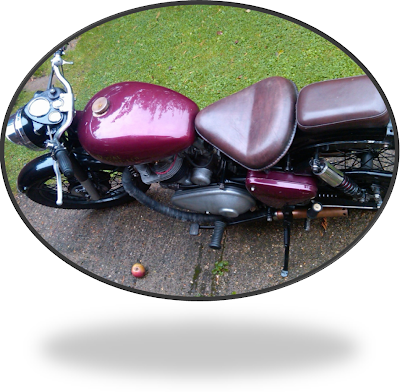 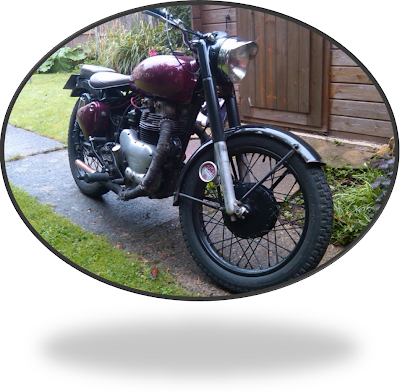 When I bought my Royal Enfield in 2003 I wasn’t looking for or even considering a Royal Enfield, I wanted another Triumph like I’d had in my yoof! But bloody hell they were a lot more than the old days!! I got directed to Haywards in Cambridge by a guy just outside Biggleswade, we’d stopped to have look at his roadside advert for a BSA Golden Flash which turned out to be in a right state! However he was keen to show us his recently acquired Royal Enfield Bullet Clubman that he was storing in his dining room extension! He raved on about how friendly & helpful Haywards were so we decided to pootle on over! The rest they say is history!
The Bullet (as it was known when I originally bought it) was a fairly ordinary 350 single, but it had that ‘Olde britbike character’ look to it. I enjoyed its plodding ability for a while, but started getting the itch to give it a bit more oomfff! Even before It came into my possession it was a bit of a mongrel, the engine was a 1963 brit motor in a 1970’s Indian frame.
At the end of 2004 I spotted an advert in ‘The Gun’ magazine of the Royal Enfield owners Club, for a 1953 Meteor 700 twin engine that said the engine would easily fit a modern Bullet frame, my itch was beginning to get scratched!
A call was made, beer tokens exchanged, & I became the owner of said engine, not only that I have kept in touch with the Mark & we are now good friends! Also Mark is a font of knowledge when it comes to all things Enfield, a good friend indeed!
The engine had been sitting under Mark’s workbench for quite a few years, having bought it ‘sans motorcycle’ for spares for his own ‘proper’ Meteor, & never got round to using it. There was no knowing when it last ran, we just knew it was a flipping long time ago! I didn’t want to throw a whole load of money at it so removed the heads, barrels & engine covers to check for any obvious issues & was pleasantly surprised to find that when the engine was laid up, it had been filled with lovely clean oil, & that no serious problems were apparent. So I thought that I’d just whack it in the Bullet frame & see if I could get it running. It really was a straight swap, honest! Using the same engine plates, chain & even the 350’s carburettor!
The ‘Mullet’ was born.....
......that was eventually!! Despite correct sparky things, petrol, timing etc we couldn’t get the bloody thing started, even after much kicking & my mate pushing me up & down the road. It wasn’t until I wondered what would happen if I switched the plug leads over that we had instant success!! Definitely a Doh!! moment. After a bit of tinkering it ran pretty good for motor that was over 50 years old, hadn’t been started since god knows when & was using a carb from a 350 single! It ran quite happily like that for at least 18months, but I eventually treated it to a brand new 30mm Amal Concentric scored off ebay for £30!! Couldn’t believe it! That made it run a bit better!
I’m not one for loads of spit & polish so I’ve been letting it slowly grow into itself, don’t get me wrong though I like it to be relatively clean & tidy but with the ‘patina’ of use! After something like 4 years use which included trips to South Wales & Devon as part of the Round Britain Rally, without any major mishaps or surgery, I decided to give the motor a bit of a makeover & had a re-bore, new old stock pistons (which again I got from ebay dirt cheap! Luckily they turned out to be the correct next rebore size too!!) I also fitted new valves, guides & had the distributor rebuilt. It still rattles like buggery though, which would probably be helped by replacing the timing & dynamo chains.
I have made various changes over the years to make it mine, like fabricating a new battery carrier from an old rubber battery & relocating it between the rear mudguard & engine, making up some new support brackets for the rear mudguard. I’m not trying to make it fit any style or label, just doing things on a budget and that are pleasing to my eye. There are a few more ideas in the pipeline, so we’ll see where it ends up!
Brought to you by Quaffmeister at 12:10