Back Hub Set Up 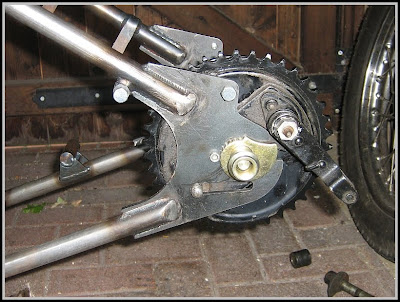 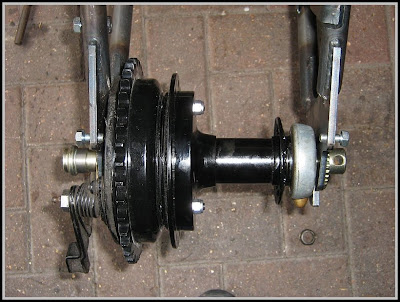 Because Enfield have been building them for over 50 years, they do seem to have got 'em nailed. This half width hub was bought from India some months ago in preparation for this. Originally the hub has a fixed spindle journalled up between the two inner races of the wheel bearings. As the rear end section is made to replace the back end of the later full width hub type frame, there is a discrepancy with the width of the axle slot on the drive side. The standard full width hub incorporates a QD system, with the sprocket and rear brake set-up remaining attached when the wheel is removed. The half width hub, whilst utilising a similar cush drive arrangement is not QD.
This led to thoughts of making stepped spacers or welding a short spacer onto the drive side wheel adjuster to make up the gap. Then in a flash of realisation it occurred to me that the wheel bearings are the same in both set-ups, so why not use the push through spindle of the later design on the earlier hub. An order was sent to Hitchcock's for a new spindle and half spindle along with some later (post '98) adjuster snail cams - these have 24 rather than 19 notches for more adjustment. The price of standard parts for Bullets is so cheap it's really not worth messing about with old and worn components.
The bearings were fitted into the hub minus the fixed spindle and sure enough the new spindle slid through in an identical manner to that of the full width version. Another difference is the hole in the brake plate, the earlier one only has a 14mm diameter hole for the spindle whereas the later ones accommodate the half spindle. This made for a brief hold up until it was realised that the new brake plate would probably fit the new early drum, of course it did......result!
The half spindle is used to support a hub carrier bearing in the later application, this is not an issue on the half width, but it does not allow it to be used in the standard orientation. This needs to be machined to fit it in the space available, which is in progress at the moment. A spacer also needs to be made to take up the gap between the inner races of the wheel bearings, this will be the same length as the raised centre portion of the fixed spindle, with a spider arrangement at each end to maintain concentricity with the hub body when the spindle is inserted.
Once the machining has been done and the hub can be bolted up solidly, the rim offset can be measured and the wheels can be built.
Brought to you by Quaffmeister at 11:03