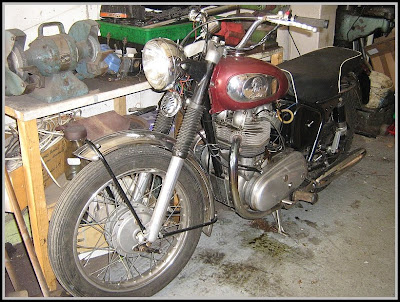 There's Enfields from India and there's Indian Enfields. A rare Indian badged Interceptor seen at Geoff's yesterday,it belongs to his son Dean who is the Enfield guru who lent me the girders.
The running gear is pretty much the same as the Bullet and the engines will go in, or so I'm led to believe. Craig has got a 500 Meteor engine fitted into his Bullet, couple of pictures of that would be handy Craig.
Brought to you by Quaffmeister at 00:43