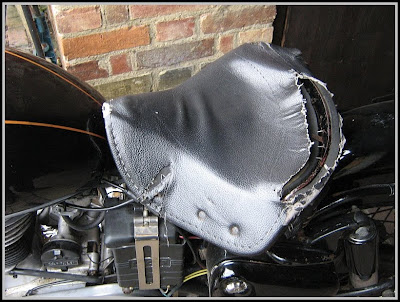 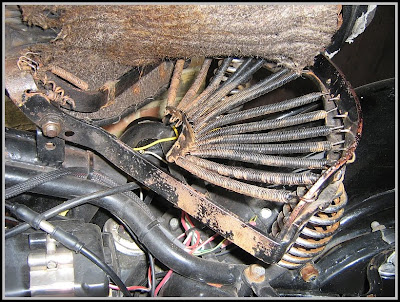 Went to a little gig over towards Saffron Walden yesterday, a few of my old mates turned up including my long time pal Chris on his 77 T140V. Chris is a fan of off roading and trail biking big time. He told me that he came over, on his standard Bonnie, mostly off road and the tracks were hard and for the best part flat. So when it came time to leave I went back with Chris who inevitably took the more adventurous route home! I've done a bit of trail riding in my time and the thought of doing it at night holds no fears, and the Marauder coped admirably, big singles seem to thrive on this sort of work.
What didn't fair so well however was the seat, as shown above, I thought the cover had finally fully torn across the back as that's been tatty for some time. On closer inspection this morning it was revealed the mattress spring set up has broken in half, oops!
Looks like an order to Hitchcock's some time today is in the offing.
Brought to you by Quaffmeister at 02:10

Labels: Off the wall shit