It was an early finish at work today, so it was a good opportunity to get down and dirty with Mr Makita, it was getting obvious that the time was right to do that thing. 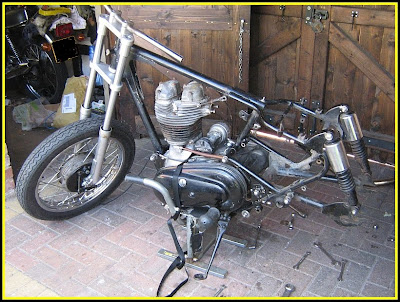 The bike was hauled up onto a paddock stand and strapped down. Exhaust, chain and back wheel came off in pretty sharp order. I was going to whip the swinging arm out as well but the spindle seemed to be pretty happy where it was. I will have to get it out as it will be handy to use when setting up the single sided rear hub, as there are one or two differences between that and the later full width unit. 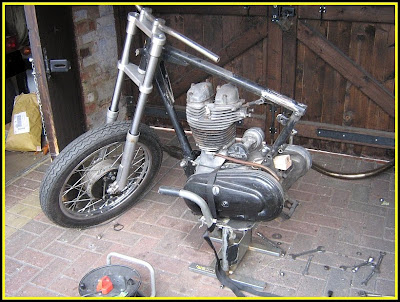 The welds holding the back end assembly on at the top tube were ground through using a thin cutting disc on the angle grinder. Two through studs were removed along with the footrest support bar. The rear section was then lifted clear. 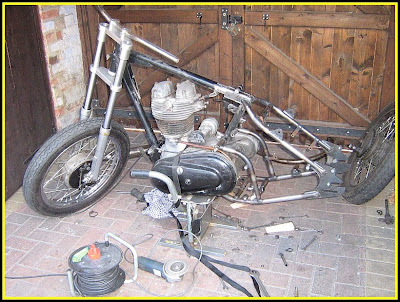 After cleaning up the tube around the cut area the hardtail was offered up. This lined up with little effort, allowing the through studs to be refitted.This in turn aligns the top bracket for drilling, this was duly done and the whole plot tightened up. 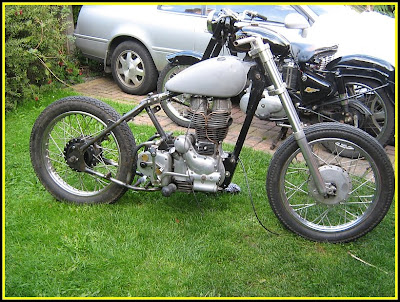 This is what we're talking about, a long way to go but the foundations have been laid, Oh hell yeah baby
Brought to you by Quaffmeister at 10:14